Answers to the questions you were afraid to ask! You aren't the only one who wanted to know! Have another question? Ask it in the comments and I will find the answer! 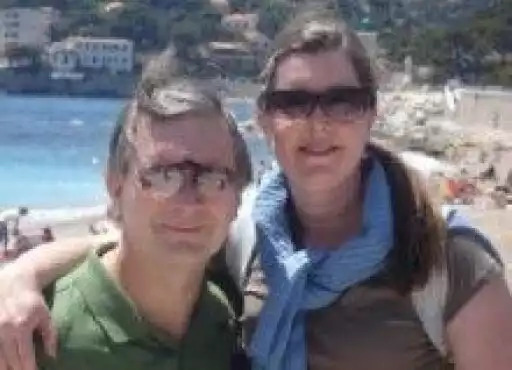 Why does the sand squeak when I walk on it at Pensacola Beach? It doesn't do this on the east coast!

I have heard people say the beach at Tiki House is "squeaky clean!" But barking, squeaking, or whistling sand is caused by the unique quartz sand found here. Since the sand particles are small and round (spherical), the air between the grains escapes when you step on it. Also the grains rub together and the noise can be heard. You will notice it is louder in the fluffier areas (more air) than at the water's edge where the air has been replaced by water. Only dry sand squeaks!

Check out more from Wikipedia! 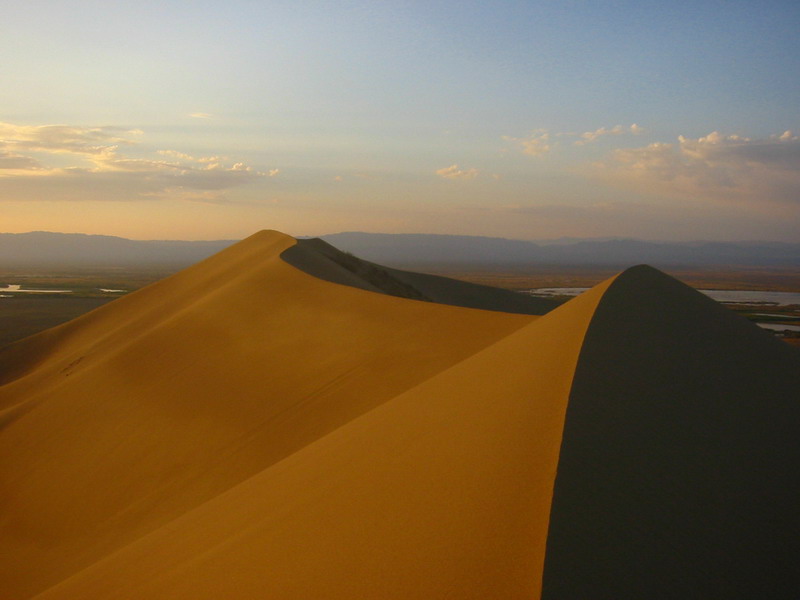 Why do some shells have a hole in them? They look like they are made for a necklace!

Those shells with a hole are actually victims of sea snails! Sea snails drill a hole in the shell of the clam using their tongues and by secreting carbonic acid. They insert their siphon, and the acid turns the clam into a smoothie inside its shell. Then the snail drinks the clam smoothie for a nutritious meal. And the remains wash up on shore. Feel free to make these "holey" shells into a necklace, if the explanation doesn't ruin it for you. They make a great memento of your stay at the beach and Tiki House Pensacola Beach Vacation Rental. 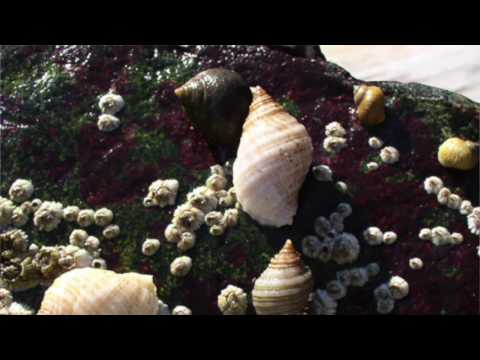 #OceanRunnerNH: Who's drilling holes in the shells?
Ocean Runner Nichole is curious about the perfect little round holes she has seen on empty periwinkle, mussel and clam shells that she has seen. Seacoast Science Center's Ashely Stokes explains how some snails are herbivores and some, omnivores.
https://www.youtube.com/

What's the big deal with sea turtles? Everywhere I go, people are talking about turtle lights, turtle nests, and more!

Sea turtles are endangered species! The females return every spring to the beaches they were hatched from to make their own nests and lay their own eggs. Development and encroachment on their habitat has meant these beautiful creatures became more and more rare. But due to all the laws and publicity, the sea turtle is on the rebound. There are 5 species found in the Gulf of Mexico, and 4 that are known to nest on Pensacola Beach. These are the leatherback, loggerhead, the green sea turtle, and the Kemp's Ridley turtle.

While staying at Tiki House or any Pensacola Beach vacation home, you may see areas blocked off with stakes and twine. These marked nests are turtle nests. If you see one, leave it alone! If you see a large turtle on land, call the Florida Fish and Wildlife Conservation Commission 24-hour hotline at 888-404-3922.

The females crawl onto the beach at night, move above the high tide line as far as the dunes and dig a nest. The nests are huge! They have to be for the 100 or more eggs the female lays. The yard wide nest is then covered by the female and the turtle returns to the water. The eggs are now on their own!

Because sea turtle hatchlings navigate by looking for the reflection of light on the water, man-made lighting can be very confusing as they try to make it to the safety of the water. Turtles on land are vulnerable to predators and injury. So turtle lights (red-masked lights) and the urging to turn off all outdoor lights when not in use are all meant to protect the turtles and hatching babies.

The rules about leaving holes on the beach is also for turtle safety. Turtles are not quick or graceful on land, and holes on the beach can trap and injure the females and babies. The hatched babies are in a race to get to the water before birds and the environment can claim them. A hole can mean certain death.

Because the turtles are listed as threatened or endangered and protected by the Endangered Species Act, it is a federal offense to injure, trap, or cause the death of one. To avoid fines or even jail time, don't ever interfere with a nesting or hatching turtle.

Here are some helpful tips:

GO DARK
When walking the beach at night during turtle season, remember to use a red flashlight. Sea turtles and hatchlings are less likely to be attracted and disoriented by red lighting.

TURTLE ETIQUETTE
Don’t touch or harass a nesting sea turtle or baby hatchlings as they leave their nest. Watch quietly from a distance and never shine lights or use flash photography, which could disorient them.

FILL IT IN and KNOCK IT DOWN
Fill in large holes, knock down sandcastles and other obstacles to leave the beach flat for nesting sea turtles.

LEAVE NO TRACE BEHIND
Remove all tents, canopies, furniture, toys and other obstacles from the beach every night.

If you see a sea turtle or hatchling that is sick, injured, in distress or deceased, please call the local authorities and the Florida Fish and Wildlife Conservation Commission 24-hour hotline at 888-404-3922. 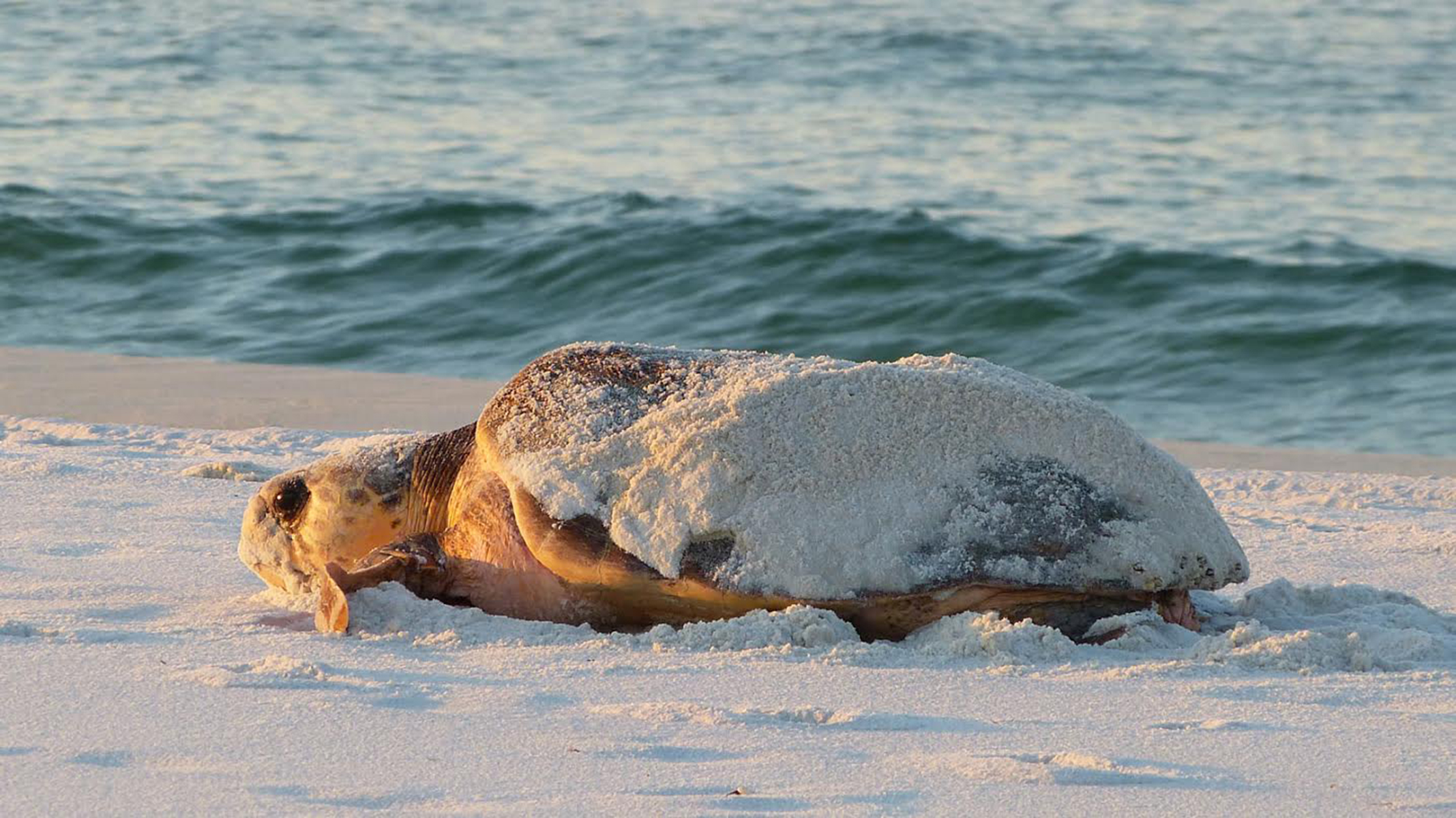 Witness the magic of sea turtles hatching, if you're lucky
It's an amazing time of year again on the shorelines of Pensacola Beach and the Gulf Islands National Seashore (GINS). Sea turtle hatchling season is in full swing all over Florida, where about 90 percent of sea turtle nesting in the U.S. takes place.
https://www.visitpensacola.com

When was Pensacola Beach developed?

The area is named for the Pensacola, a Native-American people who lived in the western part of what is now the Florida Panhandle. Though the original people left and assimilated by the 17th century, the Spanish, French, British, and Americans were not far behind. But the island remained largely undeveloped until the 20th century.

The federal government sold Santa Rosa Island to Escambia County in 1929 for $10,000. The first bridges linking Pensacola to Gulf Breeze and Pensacola Beach opened in 1931. Just a few years later, the casino, a recreational complex was built. There were several building spurts on the beach. Some were residential, like Tiki House's neighborhood. Some were condos and hotels.


Tiki House was build in 1980 as a private home. The owners later decided to turn it into a rental home when they moved away! It has changed hands only twice and has remained a favorite rental home for nearly 20 years! 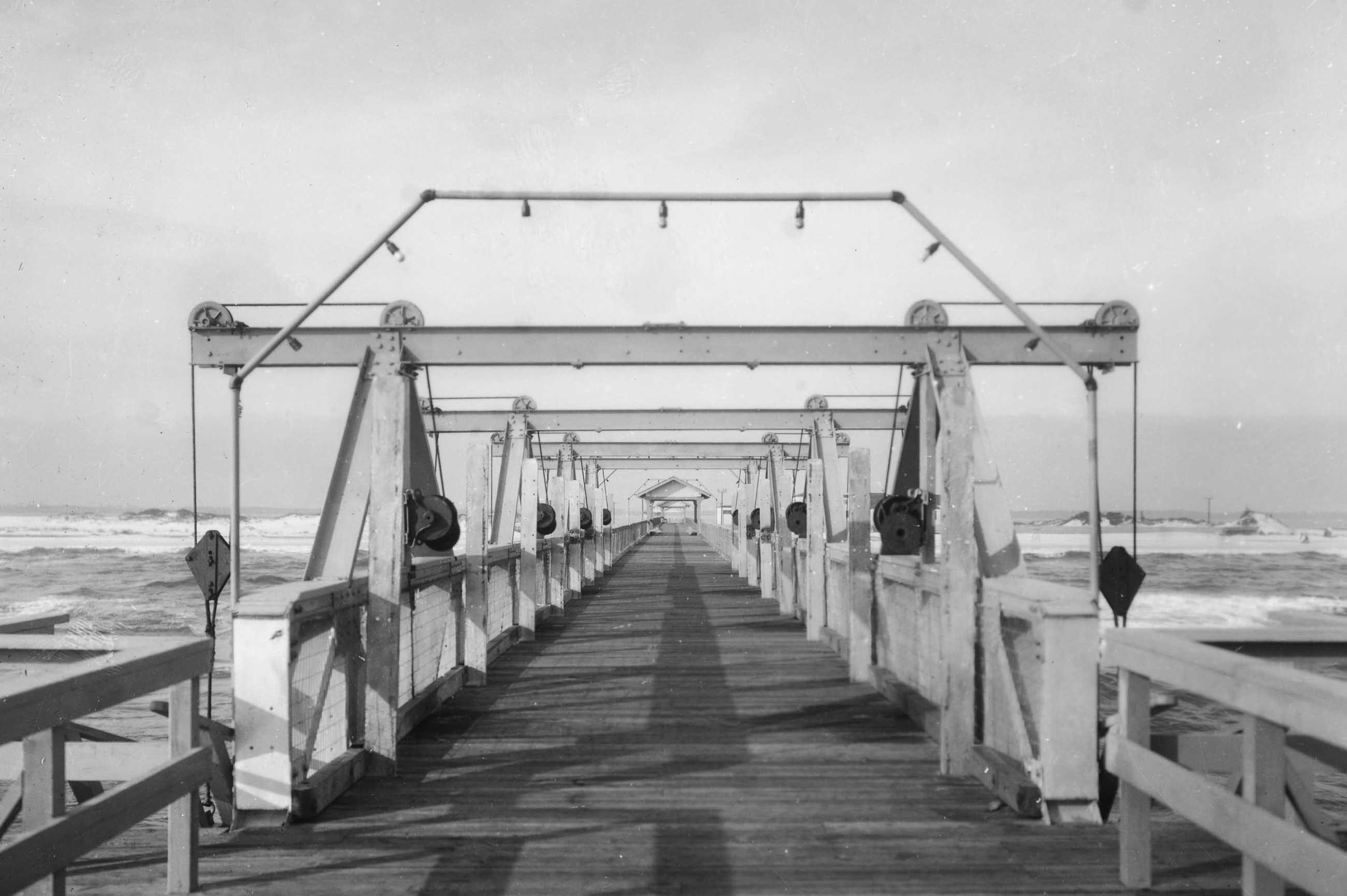 Pensacola Beach: history in photos
Pensacolians and visitors alike have always been drawn to the beach no matter what era.
http://pulsegulfcoast.com

The 40-foot flashing neon fish sign was created in 1955 for Downtown Pensacola. In 1962, it was moved to its current location in Gulf Breeze. This iconic sign is a favorite landmark for many. It brings to mind a simpler time and family fun! If you haven't seen it at night, you have make the trip! It is special. Or watch the video below!

You will see several paintings, pictures or likenesses of the sign at souvenir shops as well as in our vacation home. It is as recognizable as the beach ball water tower at Casino Beach! 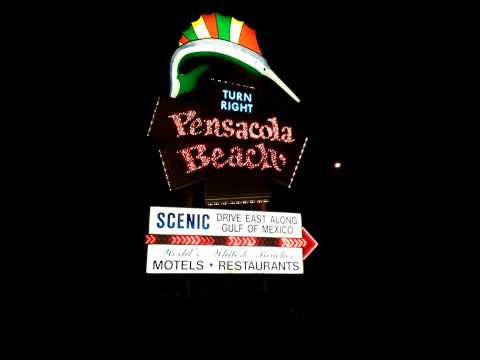 What does Geronimo, the Arizona born American-Indian, have to do with Pensacola Beach?

Famed Apache Chief, Geronimo was held captive in 1886 and 1887 at Fort Pickens, a massive pre-Civil War brick fortress located at Gulf Islands National Seashore. It is believed that he was Pensacola’s first tourist attraction, as once he was visited by 459 curious onlookers in a single day.

It was such news around the country, that the famed Apache shaman and Pensacola Beach have remained linked to this day. Geronimo used this fame to his advantage during his imprisonment and was able to bring attention to the plight of his people. His story is both fascinating and heartbreaking. To find out more, check out the exhibit at Fort Pickens National Park and the link below. 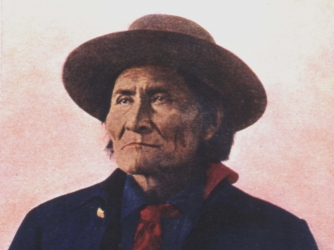 Geronimo - Native American History - HISTORY.com
Find out more about the history of Geronimo, including videos, interesting articles, pictures, historical features and more. Get all the facts on HISTORY.com
https://www.history.com 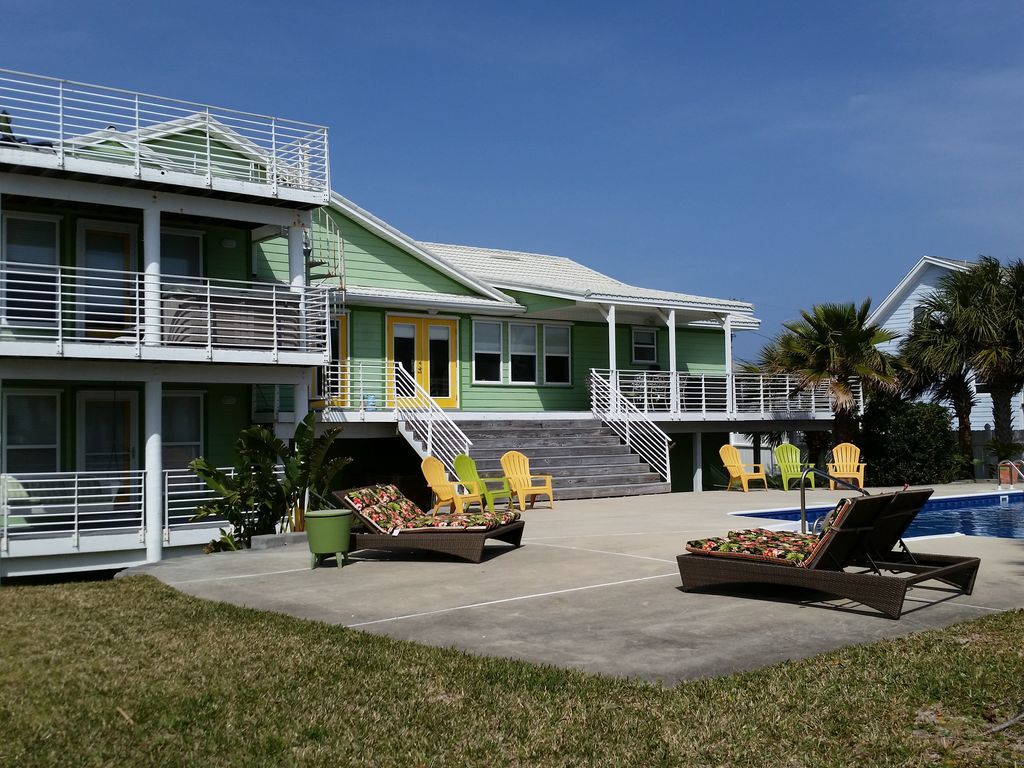 10 views
© Stephanie And Chris and Houfy Inc, Published on: 05/03/2018. Unauthorized use and/or duplication of this material without express and written permission from this page's author and/or owner is strictly prohibited. Excerpts and links may be used, provided that full and clear credit is given to Stephanie And Chris and Houfy Inc. with appropriate and specific direction to the original content. For more information, please visit the Houfy's copyright and trademark policy
Last modified: 4 years ago
2022 |