It's #Firefall Time in Yosemite! 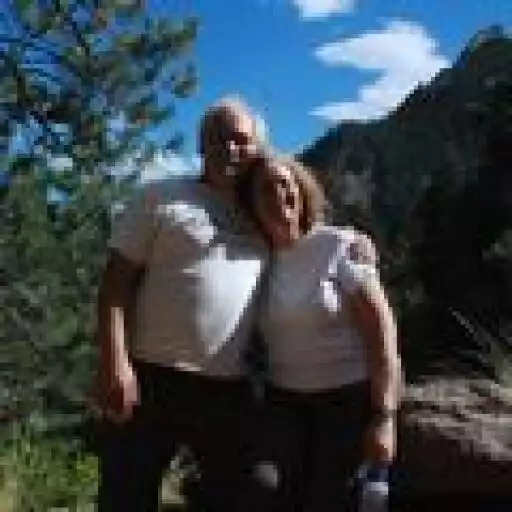 For about 2 weeks in mid-February, Yosemite visitors may have the opportunity to witness a stunning natural light show that has inherited the name of "Firefall."  For 2019 that period will peak Feb 17 through 24.

This year has not disappointed! The special combination of light, weather and water conditions has been augmented this year by plenty of fresh snow courtesy of a recent "atmospheric river." Photographer Eric Rubens describes his visit as "a day I'll never forget." 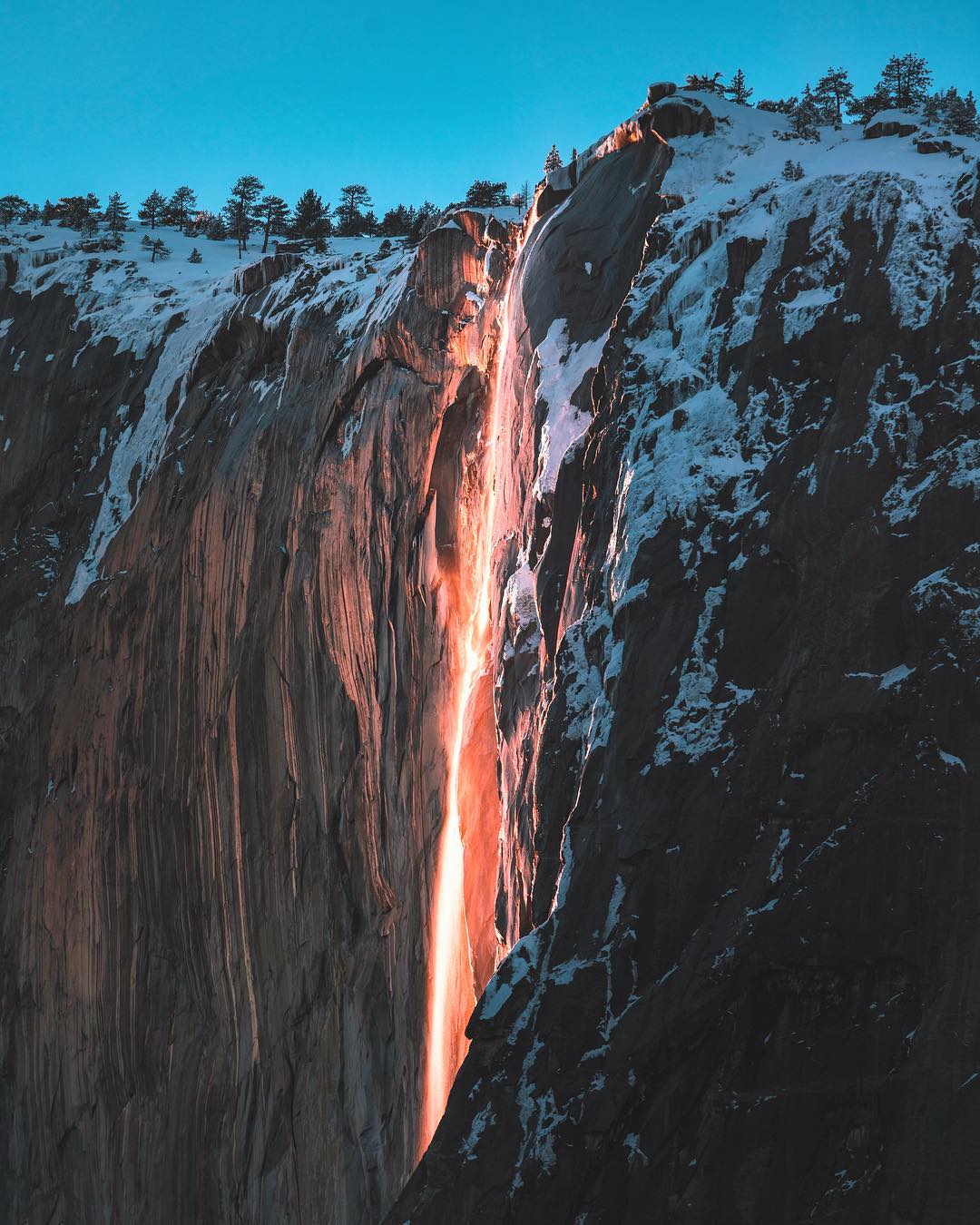 And Sangeeta Dey nicely captured this year's juxtaposition of frost and fire. 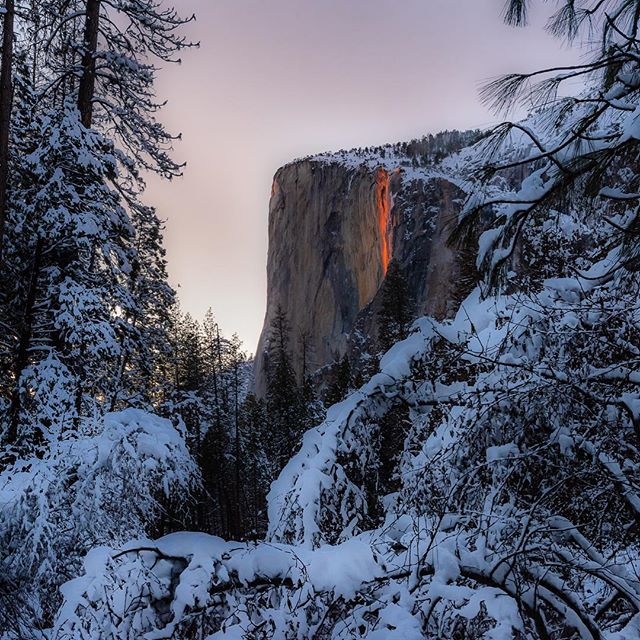 "Winter's Fire" Let the Fire Fall! The Firefall season has arrived in Yosemite, and yesterday was the first show of the season. This is the Horse tail waterfall in the Yosemite National Park. Every year for a few days in February, the sun sets at a certain angle and illuminates the waterfall in luminescent orange and red, making it look like a molten lava. As snow and rain will be back today, and will likely stay for the rest of the week, I took a chance to drive out yesterday morning. What was supposed to be a quick day trip, turned out to be a harrowing 12 hour round-trip because of snow and ice and chain requirements. When I looked at the waterfall, there was barely any flow because it was too cold. However, the sun on the western sky was shining bright so I had some hopes. Much to my delight, the water started trickling along with a few avalanches mimicking the waterfall. 15 minutes before the sunset, my camera stopped working. It was cold, and the batteries were dead. A battery tucked away in the warmth of my jacket pocket did the trick at the last minute. Finally, when I looked though my lens, there was this snow covered beauty all around me. So, I did something differently this time. Instead of zooming in, I decided to use a wider angle to capture the breathtaking beauty surrounding it. I have seen two Firefalls before, and this was likely the less "fiercest" of all, but I have to say this was one of the most beautiful given how it looked surrounded by fairy-tale like snowy atmosphere. More information on this phenomenon is here, http://news.nationalgeographic.com/2016/02/160219-yosemite-firefall-waterfall-sunset-pictures-nature/. #firefall #firefall2019 #Nikonlove #rawcalifornia #nowrongwaysf #sfgate #wildcalifornia_ #earthpix #westcoast_exposures #majestic_earth_ #cool_capture_ #photoarena_nature #naturewhisperers #inspiring_photography_admired #dream_image #visitcalifornia #jaw_dropping_shots #gottolove_this #splendid_earth #thebest_capture #igs_america #ig_unitedstates #superhubs #Yosemiteconservency #artofvisuals #nikonlove #princely_shotz #usinterior #weatherchannel
2,065 Likes, 99 Comments - Sangeeta Dey (@sangeetadeyphotography) on Instagram: ""Winter's Fire" Let the Fire Fall! The Firefall season has arrived in Yosemite, and yesterday was..."
https://www.instagram.com

The original Yosemite "firefall" was a tradition started in 1872, where each night workers at the Glacier Point Lodge would push hot coals from a bonfire over the cliff, to fall 3000 ft to the valley below.  The National Park Service eventually adopted policy changes that ended that tradition in 1968.

Then in 1973, renowned photographer Galen Rowell was in almost the right place at the right time.  From across the valley floor he noticed Horsetail Fall glowing in late afternoon light. He raced around the valley floor loop to find a better observation point and settled on a spot near today's El Capitan Picnic Area.  From that spot he captured his iconic image "Last Light on Horsetail Fall," which still remains one of the best images of the phenomenon.

Since then this natural lightshow has taken over the "Firefall" moniker from its historical, man-made predecessor. Each year professional photographers and casual visitors to Yosemite alike will seek out their favorite observation point and then wait patiently in the hope that water and sky will come together in a spectacular natural display.

Horsetail Fall location in red. No parking along roads due to the snow!

In 2018 the park service instituted a permit system to control crowds and protect the park's sensitive natural features.  For 2019 no permit is required.  HOWEVER, because of the large amounts of snow present in the valley, no parking is allowed at the traditional viewpoints.  The park service will require you to park nearly a mile away near Yosemite Village and then walk to and back from the observation areas.  Because of this, they caution viewers to come prepared with plenty of warm clothing, footwear suitable for snow and ice, and flashlights for the return trip after sunset.

If you do plan to try to photograph it, you might find this PetaPixel article helpful.  It also has a nice writeup of Firefall history and Galen Rowell's part in it.

There is more snow in the forecast for most of this year's viewing period, so be sure to check for road conditions and closures (Call 209/372-0200 and press 1 then 1) before venturing out!  And if you missed it in person, you can view this great park service video from 2011 produced by the Yosemite Conservancy.

If you liked this article, be sure to visit Yosemite's Best for more reasons why you should plan to explore this one-of-a-kind national treasure. 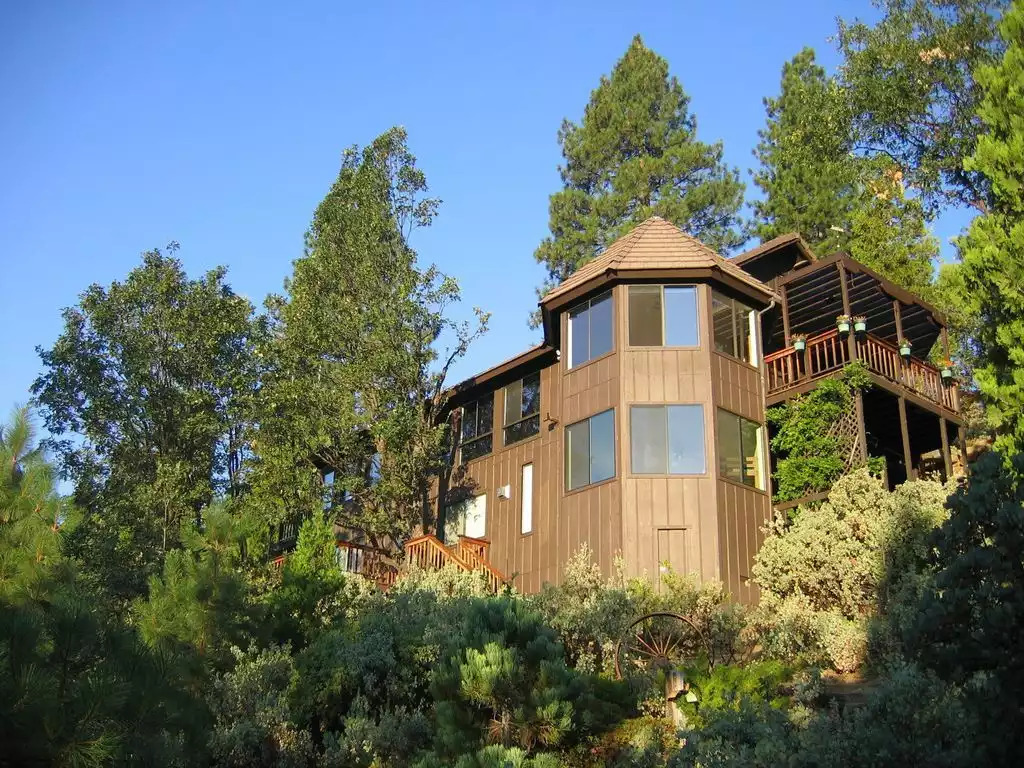 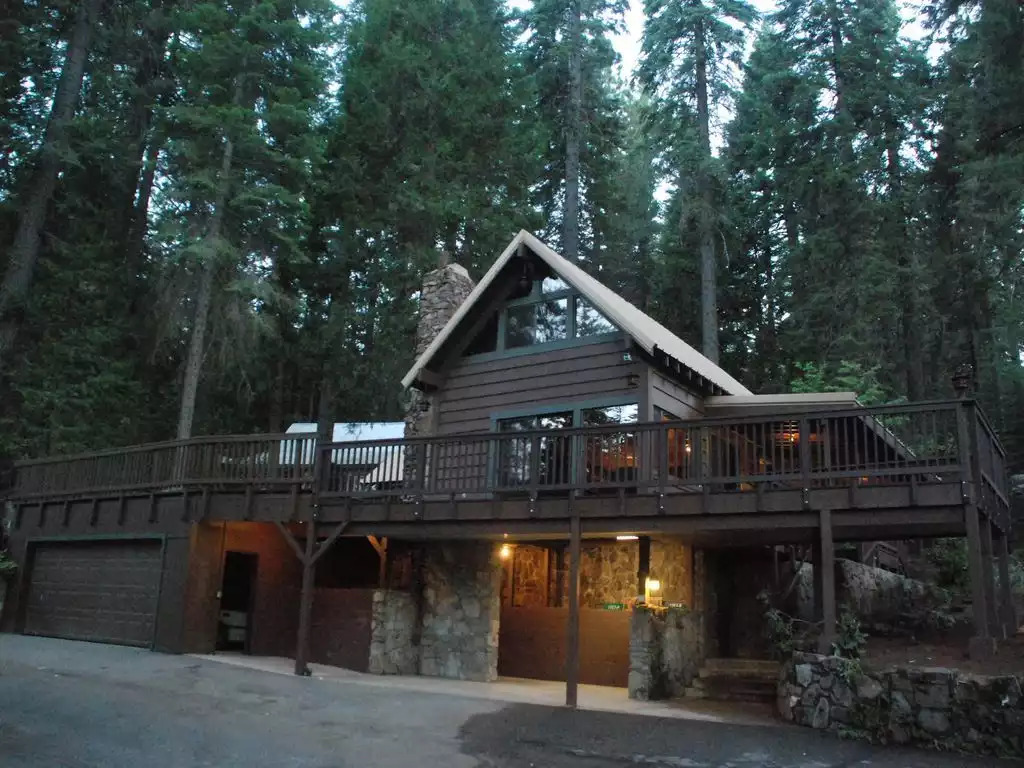 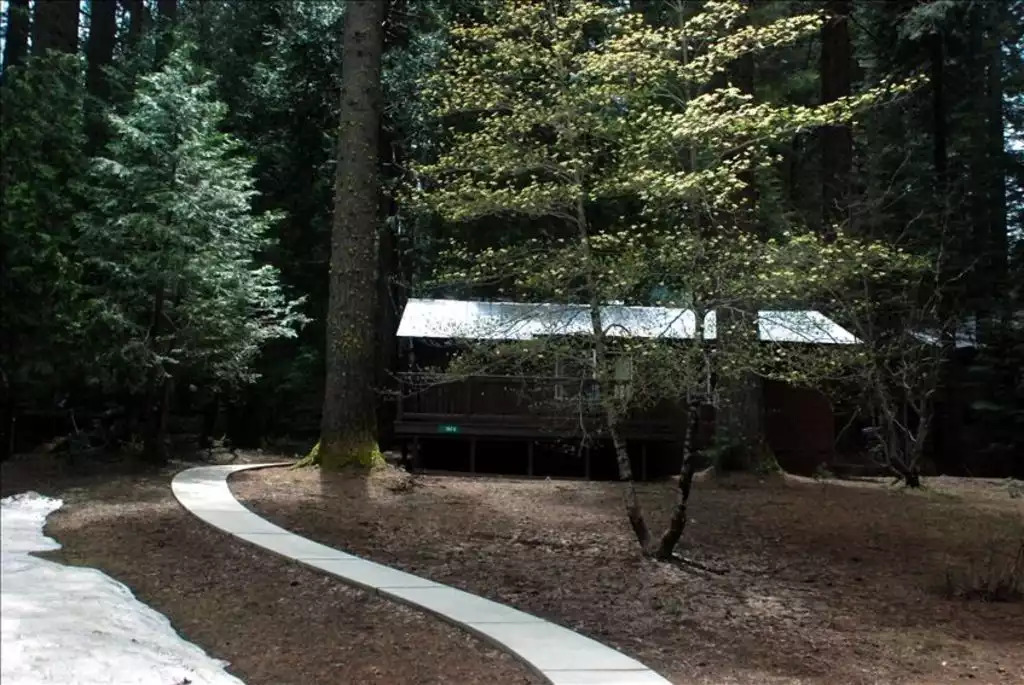 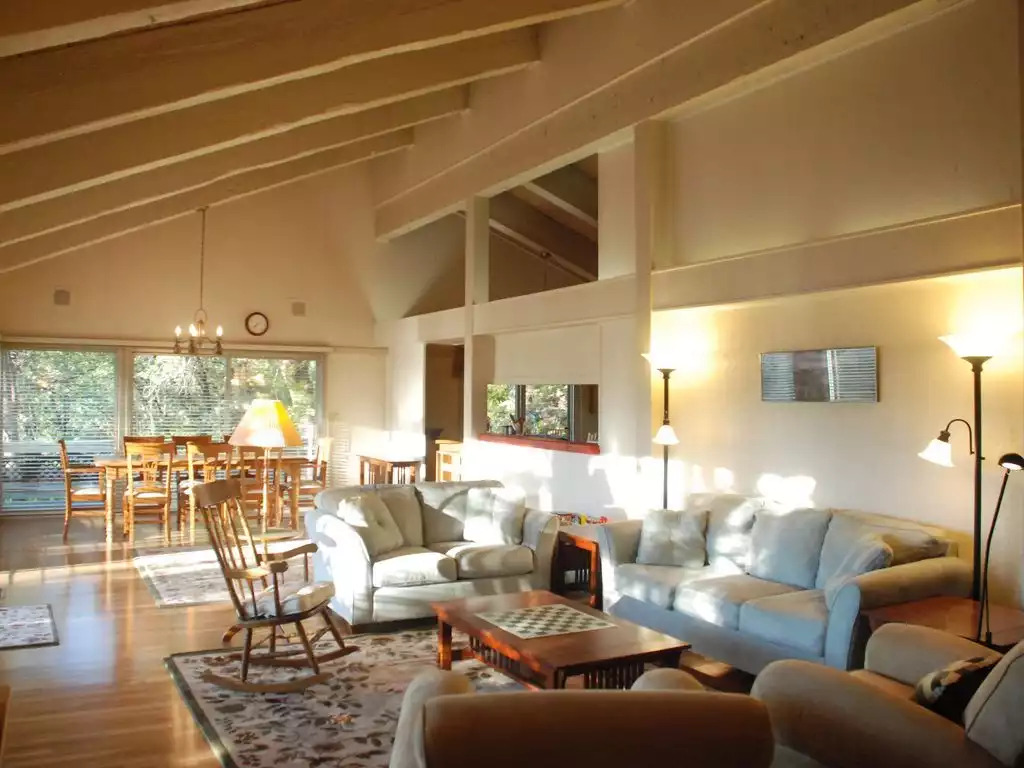 Yosemite Trestlewood Chalet
Fish Camp, CA, United States
5 Bedrooms • 4.5 Bathrooms
© David and Houfy Inc, Published on: 02/21/2019. Unauthorized use and/or duplication of this material without express and written permission from this page's author and/or owner is strictly prohibited. Excerpts and links may be used, provided that full and clear credit is given to David and Houfy Inc. with appropriate and specific direction to the original content. For more information, please visit the Houfy's copyright and trademark policy
Last modified: 4 years ago
2022 | Houfy Inc. | A revolutionary market network for properties worldwide
TermsPrivacyCookiesSitemap
Loading Views...